What’s Behind the Garage Door?

Home/Garage Door Tips/What’s Behind the Garage Door?
Previous Next

What’s Behind the Garage Door?

Homeowners are getting rid of stuff that is embarrassing when the door’s open; for some, it’s a whole new room 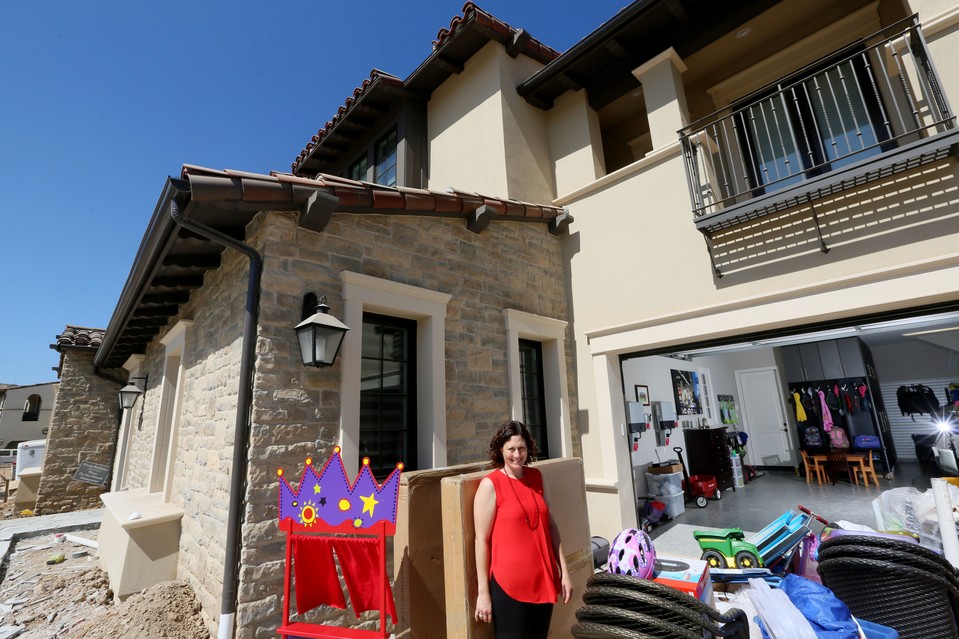 Heather Weisman and her family moved from Buffalo, N.Y., to a house in San Diego that lacked a basement. She has had cabinets installed in her attached garage, so the space would feel like an extension of her home’s interior. ENLARGE

“It got to the point where I didn’t want to go into the garage anymore,” says Mary Thompson Hunt, a radio-show host in Orlando who is working to clear her two-car garage and eventually fit one vehicle inside.

Fed up and out of space, more people are confronting the mess their garages have become—dumping grounds for holiday decorations, bicycles and inherited furniture. Sales of garage-organization products are expected to increase 4.5% this year and each year after through 2019, ultimately reaching $2.4 billion, a 25% rise from 2014, according to market-research firm Freedonia Group, a unit of MarketResearch.com Inc.

The cleanup comes as garages are getting bigger. Last year, 24% of new completed single-family homes had garages for three or more cars, up from 17% in 2000, according to the U.S. Census Bureau.

Garage frustration is reaching new levels of urgency after years of cheap consumer goods, says Lisa Mark, a professional organizer in Los Altos, Calif. “We’re starting to realize that our very expensive cars are sitting in the driveway while we’re housing our inexpensive stuff—and even junk—in the garage.” 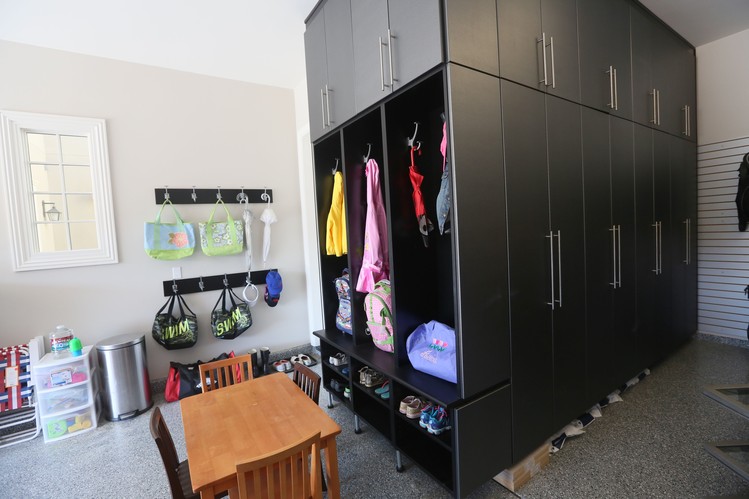 Heather Weisman’s garage has a speckled black, white and gray epoxy floor, and the walls are painted the same gray shade as the walls inside her home. Dr. Weisman’s children stash their jackets and shoes in the cubbies and the family has hung pictures to decorate the space. PHOTO: SANDY HUFFAKER FOR THE WALL STREET JOURNAL
One in four people said they can’t fit even one car into their garage. A third of respondents said they keep the garage door shut so others won’t see the mess, in a survey last year by Whirlpool Corp.’s Gladiator GarageWorks line of garage-organization products. Some 20% of homeowners said they have argued with their spouse about the state of their garage, the company says. “There’s a lot of friction in the family about the garage,” says Josh Gitlin, Gladiator’s general manager.

At first, Gladiator marketing used images of a dream garage, says Mr. Gitlin. “But the feedback we got from customers was that those shots scared them,” he says. “They just knew they could never pull that off, and didn’t even know how to get started.”

Last year, the brand introduced starter kits that encourage people to start small. The kits each include only a few hooks or hanging units for common items like lawn tools, sports equipment, ladders and boots.

Mark Vantress and his family moved to a new home in Los Gatos, Calif., last year, and nine months later the garage was still full of boxes. “My wife and I would stare and get overwhelmed,” says Mr. Vantress, a professional artist. “I realized we needed professional help.” 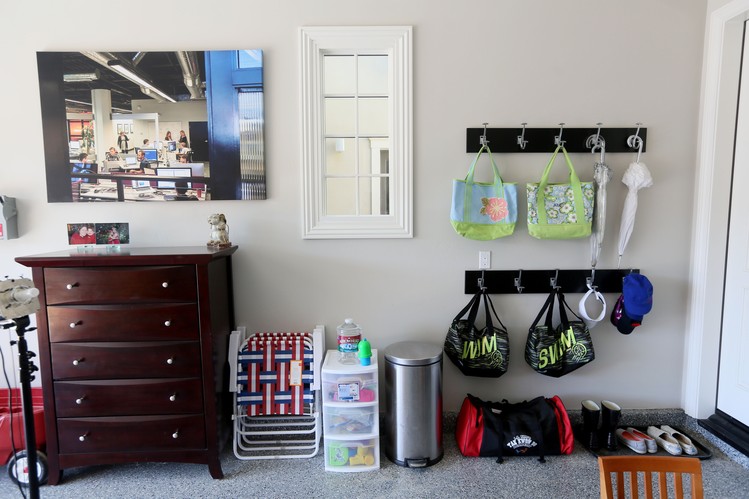 Heather Weisman wanted her garage to feel like an extension of her home in San Diego. PHOTO: SANDY HUFFAKER FOR THE WALL STREET JOURNAL
Working with an organizer, Mr. Vantress says the transformation of the garage into an art studio is nearly complete. One significant garage pile still needs tackling, though: their children’s art work, photos and other memorabilia. “We just decided we’d save that for another day,” he says. “It requires a much deeper level of processing that we aren’t ready for.”

Marital discord over the garage has been lucrative for Magic Garage Cleaners, where women make up about 70% of clients. “The wives say ‘I’m sick of my husband telling me for six months that he’s going to clean the garage,’ ” says David Panes, owner of the Sparta, N.J., organization business. “That’s when they call me. I try to help people purge and at least be able to pull one car inside.”
Solomon Petersen, owner of Miami-based weCleanGarages.com, says roughly half of the couples who use his service work well together. “The other half of the time we are divorce mediators and it’s just bad,” he says. “One person wants to get rid of everything, and the other is a pack rat.”

Barbara Berman, an elementary school principal in Mountain View, Calif., says her garage got out of control after she moved her deceased parents’ belongings to her home six years ago. “So much had emotional attachment for me that I hadn’t been able to get rid of anything,” she says. Last month, she finally got rid of most of it and organized the rest. “It is so freeing,” she says. “I can walk in my garage and get to everything in there.” 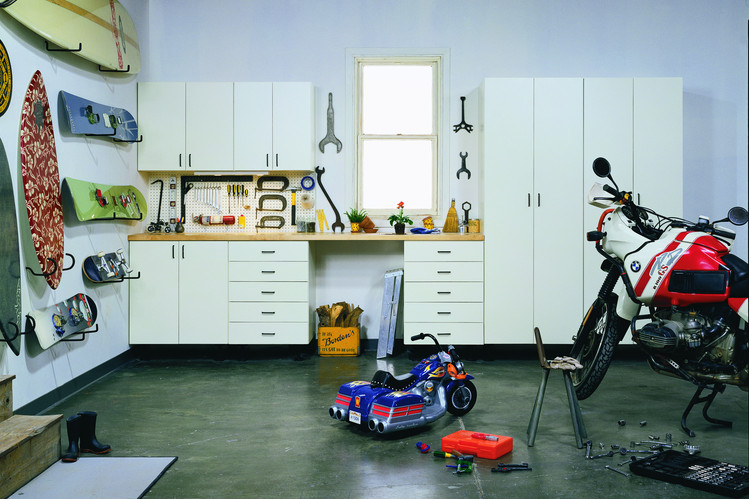 California Closets designs organization systems for garages with custom storage options, including cabinets and wall systems so tools and equipment are kept tidy and accessible. PHOTO: CALIFORNIA CLOSETS
Keeping up appearances adds to the stress of a messy garage, organizers say. For neighbors “driving by and waving hello, they are looking into your life to a certain extent,” says Benjamin Weiss, a San Diego-based senior design consultant for California Closets, maker of custom organization systems.

California Closets says sales of its garage products have doubled since 2010, as investing in the garage has become a bigger priority among homeowners. “When clients are moving into a new home, they’re even choosing to do their garage ahead of certain furniture purchases and landscaping, because they’re so starved for storage and organization,” Mr. Weiss says.

Last year, Heather Weisman and her family moved from Buffalo, N.Y., to a house in San Diego that lacked a basement. She spent about $15,000 to have cabinets installed in her attached garage, so the space would feel like an extension of her home’s interior. The garage’s new epoxy floor is speckled black, gray and white, and the walls are painted the same Sherwin-Williams “worldly gray” shade that covers walls inside her home. There are three charcoal-colored cubbies near the door where Dr. Weisman’s children stash their jackets and shoes. Several pictures that didn’t coordinate with the home’s interior now decorate the garage walls.

“When I show people the house, I say ‘You have to see the garage,’ ” says Dr. Weisman, an allergist. 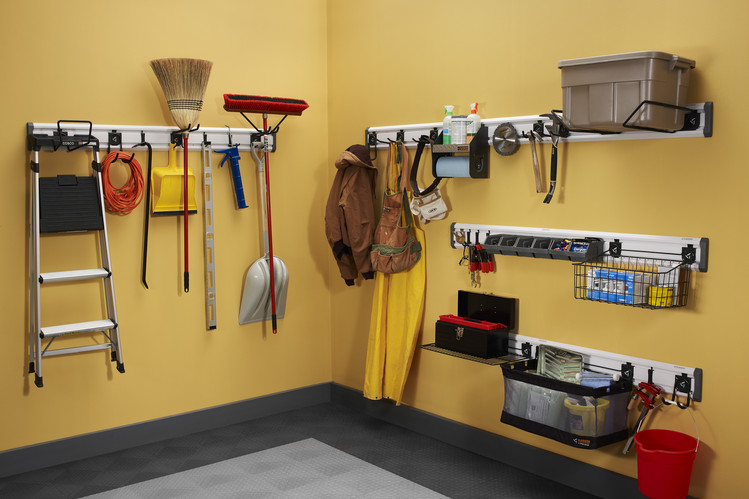 Whirlpool Corp.’s Gladiator GarageWorks line of garage-organization kits. According to Whirlpool study, one in four people said they can’t fit one car into their garage. A third of respondents said they keep the garage door shut so others won’t see the mess. PHOTO: GLADIATOR GARAGEWORKS
In June, Bekah Shaffer and her husband, Ryan, applied a Rust-Oleum finish on the floor and hung decorative window panes on the wall to add a festive atmosphere for parties. Chalkboard paint on a wall is for writing a dinner menu or “happy birthday.” Lawn supplies and tools are tucked into cabinets, hung up or placed on shelving that can be covered by a sheet, says Ms. Shaffer, a writer in Kokomo, Ind. “We’re careful to keep it neat because we know that people will be hanging out in there.”

Nancy Gray and her 19-year-old son call her garage “the lair,” because it now holds a black-leather couch and matching oversize chair, foot stools, a big-screen television, videogame console and an area rug. “My son now has a room that’s fun for him and his friends,” says Ms. Gray, a psychotherapist in Menlo Park, Calif. “I park in the driveway.”

Write to Ellen Byron at ellen.byron@wsj.com

My garage door opener was 10 years old and it stopped working. Simon came the same day and replace my garage door opener. The service was fast and the quality superb. Thank you guys for a job well done. I really appreciate such fast service.

Thank you Simon and Sean for my new doors. I can’t say enough great things about this company and love how my new doors look. They came out and replaced them in 1 day! Great customer service and I’m very happy with the services they provided. Thank you lion garage doors

These guys saved my garage , I was late for work , they came fast and fix my garage ,my spring broken and they replace my springs in no time , thank you Simon

Great service, my car was stuck inside the garage, frank arrive with no time, he changes our springs And check the garage door for safety and balance, Thank you frank for amazing and quick job

Ok so Simon is awesome and a know it all. Just call him. He came in like 25 mins when My for broke. I can say Lion Garage Doors are true professionals. The spring on our garage door broke today. Simon showed up was courteous and professional. He offered us 3 choices, and fixed the spring in about 30 minutes. We could not be happier with our experience.

This was my first time to have my garage door fixed. I requested a quote and Shawn responded very fast. He answered all my quasrions before he send someone to fix garage door. I got a fast appointment and they fixed the problem quickly. Thank you Lion garage door repair. I would recommend 100%

A+ service. Garage door broke at the worst time – right before going to work. With super fast response and knowledge of the guys it was fixed in no time. Even though I was late to work – didn’t have to take a day off. Highly recommend.

I recently lost my key and before calling Lion Garage Door I decided to read all the reviews and to be honest I was a little concerned from all the great reviews, I thought its to good to be true. Well I have to admit. They did a Great Job from customer services to the Technician (Simon is a great guy) and the price was super great, very affordable they really work with my budget. I hightly recommend Lion Garage Doors. Thank you

thank you very much guys ,frank was honest and very helpful .

Thank you simon for amazing and awesome job , my garage door spring broke , Simon make a appt with me and show in time , very affordable price , thank you lion garage doors

We are going to be honest with you. There are some garage door problems that you can probably fix all by yourself.
For example, changing the batteries, checking and fixing your photo-eye
alignment and figuring out if the door is properly aligned and working.
But most people go over the top by assuming that they can figure out everything by themselves,
which proposes a high risk to the property and human health.
Why call us?
We are Lion Garage Doors, always at your back and call with our full-time available staff.